I’m not ashamed to admit that I spend a lot of time on the internet and a large portion of that is on social media. I’m always refreshing my feeds and checking my email and whatnot. Maybe because I was late to join the social media world I’m more than making up for it now? I wake up in the morning and immediately check my phone. It’s the last thing I do before I go to sleep. It’s what I do the second I step in my house. Is that weird? I just don’t like missing things.

Last week, though, I went to a friend’s cottage and I was without wifi for two and a half days. Not only was reception spotty but I don’t have a data plan so I was without anything but texts. Not to mention that we were only able to get one radio station and probably no TV channels, so I was lost and unaware. There was some terrorist attack in Barcelona that I heard about two days late. Being without social media really bothered me. My hand was itching to pick up my phone and click on some apps, but I couldn’t.

I see a lot of tweets from people who love being able to leave social media for a week or who purposely cleanse themselves of it for a little while. I know people who are excited to be away from it all, and I guess I can understand why celebrities choose to leave. A lot of people dislike social media. But not me. Which is admittedly kind of dumb, because I’m not even connected to much. I’m not constantly communicating with people or being social. I’m not really doing anything when I’m online. I’m just refreshing feeds and reading and keeping busy. I wish I was being more social. I wish I had a good reason to be on social media, but I don’t really.

I have a friend who is growing to despise social media. He was telling me that he only checks social media once or twice a week and he’s started calling people instead of texting them. He said, and I quote, “I don’t know how you’re on it all day.”

But here’s the thing: I love it. I love being connected. I get news right away, I get entertainment, I get information. I can stay updated on the blogosphere, fandom activities, and memes. It’s great. I do understand how toxic and tiring social media can be. I can’t even imagine what it’s like for celebrities online, but for me right now, I don’t have to deal with any of that. I know to unfollow people who annoy me and I’m not nearly popular enough to have haters.

Social media may not be the healthiest of things and I may use it a bit too much, but I think that’s okay, because I am aware of my actions and choices. It’s available and free and I’m going to use it as I see fit. I loved being able to go to a cottage, don’t get me wrong, but I am here to make it known that I missed the internet and social media. Two and a half days was hard.

What I didn’t miss, however, was makeup. I don’t even wear a lot of makeup on a regular basis, but it was so nice to not worry about if my mascara was running after swimming in the lake or if my acne was kind of covered.

What’s your relationship with social media like? Can you go two and a half days without it?

There’s this line from Hamilton: “What is a legacy? It’s planting seeds in a garden you never get to see.” As much as we’d all like to leave behind a memorable and remarkable legacy, the fact is, we probably won’t.

And you’re ready to tell me, don’t say that, you never know what the future holds!

Maybe I won’t leave a legacy fit for a history book, or even a Wikipedia page, but I still will be remembered. I know that when I die, my family and friends will mourn me, but in this day in age, so much of our lives are online too. My laptop spends an extraordinary amount of time turned on, it seems only fair that this extension of myself will be mourned too.

Several years ago I told my best friend where she’d be able to find a list of all my passwords so that if something were to happen to me, she’d be able to let my connections know. I’m sure she doesn’t remember and I’ve since moved said list so it doesn’t matter, but I still think it’s important that the idea remains.

My blog, my Twitter, my six emails accounts…They all contain my life. And every one of you reading this are a part of it. I’d hate for any friends or readers online to think I’ve just forgotten about them. I’d like to say now: y’all mean a lot.

Facebook has a Legacy setting where you can pick people now to give access to your profile upon your passing. I use Facebook so insignificantly, I don’t think any friends would use it to remember me. A lot of other websites have ways of giving similar access. When I heard this information, I have to admit, I spent a few good minutes wondering if I could convince Twitter that the girl who has the @coolbeans4 handle is dead. Apparently, without any proof, I cannot.

But isn’t it weird, that one’s online presence can live on through other people? If my friend starting tweeting for me, could you tell? If someone else started blogging for me, would you notice? It seems like a creepy idea but Tony Stark basically kept Jarvis alive through AI and we just accepted that.

And you’re ready to tell me, but that’s fictional!

Is it though? Or is it…the future?

There’s actually already sites where you can input someone’s text messages and probably other info and the computer can simulate conversation, like Replika. It was literally designed to help deal with the death of a friend in a car accident. Computers are smart, and the more info given, the more they’d be able to mimic the real style of the person.

And if that doesn’t sound like the start of the Robot Wars, then I don’t know what does.

It’s just interesting to consider. As our technology continues to grow, how we use technology to remember dead people will change as well. It’s weird that we have to plan for this already.

If you die next week (insert pause for my mother to whisper “God forbid!”), who will you leave your online presence to?

I’m a bit late to the party, but I just had to write about this! Plus I get to use my ‘Best Things On The Internet’ category which I don’t often do!

For those who haven’t heard of Spies Are Forever, it’s a musical from the Tin Can Bros, which is an online sketch group made up of Joey Richter, Corey Lubowich and Brian Rosenthal from Team Starkid. So essentially, this can be considered a spin-off Starkid musical. Spies Are Forever also features music from TalkFine, who has also worked with Starkid, and it stars the TCB, Curt Mega, Lauren Lopez, Joe Walker, Mary Kate Wiles, Tessa Netting and a new guy named Al Fallick. It was all funded via kickstarter, which is pretty cool. 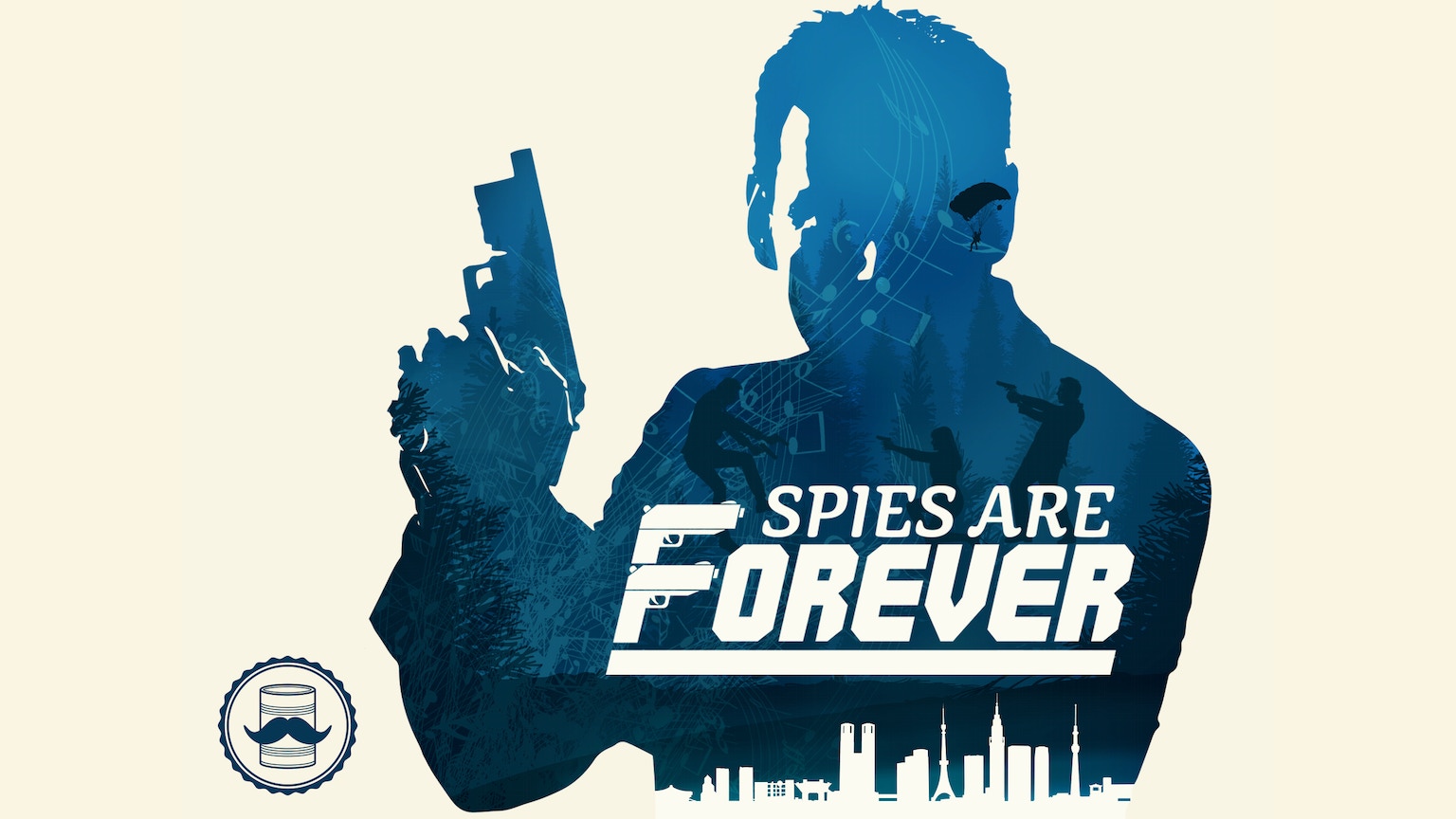 Anyways, it’s about spies and it’s got music and I’m always down to watch anything a Starkid member puts out, so this was great. Obviously, I couldn’t go see it live earlier this year because I live in Canada and it was only showing in LA, but Starkid knows what’s up and they know to put things on YouTube for us far away folk, so everyone can enjoy their work after it’s been live. Plus, the Tin Can Bros‘ work is mostly all YouTube anyways, so it was perfect. Spies Are Forever was put up one part at a time for a few weeks but I waited until it was all up to see it…and then some because I forgot to check.

Overall, it was a great show, especially for the group’s first attempt at a full length musical. I know all of them have been in shows before but participating is different than organizing.

The first thing that really stood out to me was Mary Kate Wiles’ voice. I’ve been familiar with her work since her role as Lydia Bennet in The Lizzie Bennet Diaries, but I’ve never heard her sing. She has a really nice voice, and I was impressed at her ability, as well as several other of the cast members’, to sing while doing an accent.

In terms of the music, it was great. There were several catchy songs, as well as several that really had charm and humour, and several that really fit with the theme of spies in the sense that they were cool and slightly retro. I also think they’re all lucky that so many words rhyme with “spy”. Everyone’s singing abilities were top notch, but I feel like the dancing wasn’t anything outstanding.

I loved the characters. Curt Mega played a character named Curt Mega (a little silly, but it’s a decent spy name so…forgiven) who was just a really slick, cool, classic spy. But it was neat to see this guy’s other sides like when he was interacting with his mother. Lauren Lopez played Cynthia Houston, and she was the best. I’ve always loved Lauren’s characters, so this is just another to add to the list, but Cynthia was just great. Definitely the funniest of them all. Mary Kate Wiles had a very Black Widow vibe with her red hair and Russian assassin role, but I appreciated it. Joey Richter’s best character was the bomb salesman with the nephew, as I loved that song he sang. While Tessa Netting’s character was a little clichéd, she played it well, and Barb was really likeable overall. The only character I wasn’t 100% sold on was Brian Rosenthal’s Baron Von Nazi. He wasn’t very scary considering the role and the puppet thing was really odd. But there wasn’t a character I really hated, so that was good. And lastly, without giving too much away, the big reveal about a certain character was a really predictable, but considering the theme of spies, it was alright and almost expected. They did it well.

Spies Are Forever is a funny and clever musical that any fans of Starkid, spies or musicals need to see. If you liked Kingsmen and The Man From U.N.C.L.E. but thought they needed some fun tunes, then you’ll love this!  It’s all on YouTube, so here’s the playlist! I don’t know if there will be a part 2 to this show, but I hope there is, because it really is a treat to watch!